Here [to be found]

In his Here trilogy, composer Van der Aa draws the listener into the musical exploration of the clash between the individual and his surroundings. His irrepressible fascination for theatrical and visual means is one recurring feature of the trilogy. A recognizable harmonic signature is evidence of his economical use of material. The harmonic DNA of the Here trilogy consists in each of the three sections of the same eleven chords, both in the orchestra and the soundtrack.

Here [to be found] (2001) is officially the closing section of the Here trilogy, but it was in fact the first to be composed. The density of the ideas present clearly suggests that Van der Aa realized that he could expand the theme of the individual vs. her surroundings in two additional sections. Here [to be found] sketches, using a minimum of harmonic means, a thoroughly oppressive mood, introduced by wispy chords in the strings.

The inevitable sense of drama of Here [to be found] comes primarily through the process of attraction and repulsion between the soprano, chamber orchestra and soundtrack. Just as in Here [in circles] the composer penned the tranquil yet ornate texts himself; words that express the meandering reveries of the emotionally wayward dramatic ‘ego’ (the soprano). She searches for – and finds – contact with the orchestra and soundtrack, but thereafter only sinks deeper into her own musical micro-universe. The soprano drifts ever further from the elements around her, the text as well as the music.

The soprano’s icy disengagement is reflected in Van der Aa’s music. He manipulates the music’s linear progression by snipping it up and reintroducing these fragments on the soundtrack in altered form. In doing so – rewinding and fast-forwarding – he creates an additional dimension of time. The sensation of a vacuum that arises when the music ‘freezes’ and then ‘thaws’ parallels and reflects the isolation felt by the soprano, and at the same time acts as an abstract expression of her mood. The singer, together with the orchestra and the soundtrack, searches for a new departure point. In that respect, drama and structure in the Here trilogy are constantly indivisible.
— Mischa Spel

The highlight of this Musiktage

“The highlight of this Musiktage came during a concert by the Radio Chamber Orchestra led by conductor Peter Eötvös: ‘Here [to be found]’ by the 31 year-old-Dutchman Michel van der Aa, still relatively unknown in the avant-garde scene. His piece for voice, chamber orchestra and soundtrack contains cantilenas sung beautifully by soprano Barbara Hannigan. The music flows organically and is of exquisite simplicity. After the preceding examples of aimless syntax and compositional convulsions, ‘Here [to be found]’ was a true blessing.”
— Stefan Hoffmann, Die Welt, 23 October 2001

“One could say that Michel van der Aa poses the best questions during these Donaueschinger Musiktage, both to himself and to the music. For example: how can I best express what I want to say? And, worthy of a true craftsman, not only: how do I build a tower?, but also: how do I then get out of the tower? How can I say the ‘old’ is new again? Van der Aa’s piece is called ‘Here [to be found]’ and the title does not promise too much.”
— Mirko Weber, Stuttgarter Zeitung, 23 October 2001

Success for Van der Aa at the Donaueschingen Festival

“Success for Van der Aa at the Donaueschingen Festival. It’s beautiful how the airy string chords precede Van der Aa’s quiet poem. He knows how to freeze a scene, create a vacuum. The theatricality in turbulent figures comes across very well. The same is true for the ending, where the synchronicity of the voice, the orchestra and the soundtrack gradually disintegrates. The piece was very successful with this select audience that included many composers, programmers and publishers.”
— Ernst Vermeulen, NRC, 22 October 2001

(Performance at Netherlands Music Days 2001). “The Radio Chamber Orchestra, conducted by Peter Eötvös, concluded the festival yesterday in a special way. Along with Rudolf Eschers ‘Nostalgies’, it performed ‘Here [to be found]’, an impressive work by Michel van der Aa…The sound of the electronic soundtrack melted with the orchestra and the soprano, and ‘mechanical switch’ sounds send into the hall through loudspeakers triggered the orchestra to start and stop. There we finally had the idea that we were listening to ‘state of the art’ Dutch music and for a moment it lifted the festival above its provincial level.”
— Anthony Fiumara, Trouw, 17 December 2001 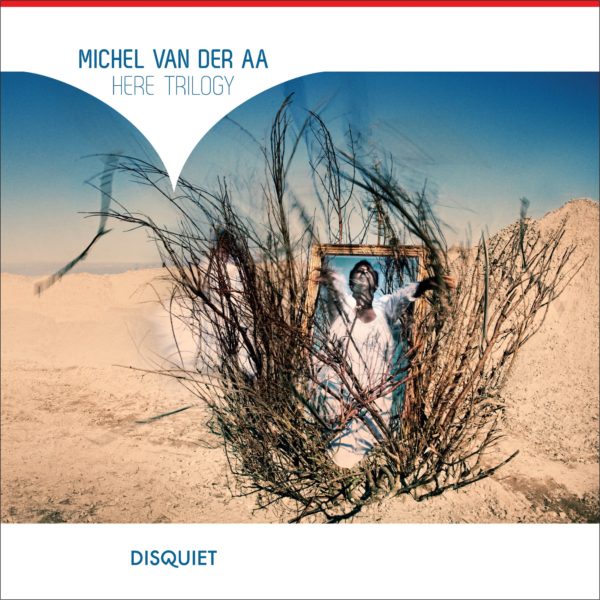 for soprano, chamber orchestra and soundtrack
2001

Here [to be found]

All performances of Here [to be found]